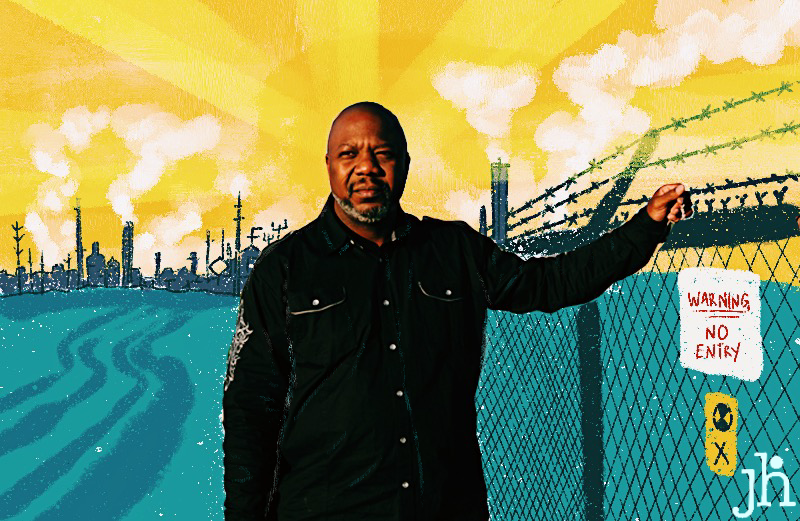 “And we’ve come to realize that, you know, it is what it is and this is my home. I can’t afford to go anywhere else. So I’m going to maintain what I have, I’m going to do the best of what I have…Nobody really wants to leave their community. And I don’t blame them because it’s our culture and we shouldn’t have to move just to have clean air to breathe. That should be a given, a God given right to drink clean water, to breathe clean air.” — Hilton Kelley

In the late 1960s and ’70s, the environmental movement was picking up speed. Landmark legislation, such as the Clean Air Act and the Clean Water Act, were passed, along with the formation of the Environmental Protection Agency (EPA). Things were looking up for environmentalists. But the fight for a pollution-free environment is still an ongoing battle for many communities.

Ralph Nader is a big name in the environmental justice world. And while his accomplishments may be well known, his journey to activism, stemming from his childhood, is a lesser told story. In this latest episode of American Diagnosis, Dr. Céline Gounder speaks to Mr. Nader about his formative upbringing and how that led him to stand up for his community and his nation.

Nader grew up in Winsted, Connecticut. Back then, Winsted was a mill town. His father worked at the local textile factory, but his activist mother was his inspiration. And while there were rivers in town, they weren’t the sort that were suitable for children to play in. Nader recollects how, “we never grew up even thinking that we could wade or fish in them. They smelled bad, and looked bad too. They looked like rainbows.” This was because of the runoff pollution from the local factories — but at the time, he didn’t think much of it. “They used our air and water as sewers,” Nader continues, “I mean, it was just a normal thing to do.”

After college, Nader went on to Harvard Law School. This path would eventually lead him to environmental activism and consumer protections. He fearlessly took on the big corporations. And, he knew how to organize his community. With well-planned advocacy groups and a willing political climate, Ralph Nader was able to make change both on a community and national level.

But that was the 1970s. Now, it’s the 2020s, and as the politicians in power have come and gone, so have environmental protection laws. Environmental activist Hilton Kelley of Port Arthur, Texas, knows this all too well. He grew up in a historically African-American community — a community that is also surrounded by local oil refineries and chemical plants. The smell of sulfur hangs in the air, at times so pungent that it sticks in your nose and triggers a cough. When the refineries light their stacks, heavy soot clouds the sky. “We have a large number of people in this community with respiratory problems, like asthma and bronchitis,” Kelley explains. Many also suffer — and have died — from cancer.

However, the community also needs these refineries for employment. They pay nearly double the minimum wage and provide stable jobs that allow families to put food on the table. People don’t want and shouldn’t have to leave their home and community “just to have clean air to breathe.” Kelley is aware of this issue and recognizes this conundrum in his fight for environmental justice and health in Port Arthur. And he’s already been very successful. By organizing his community and collecting data and facts on polluting emissions, Kelley has been able to get many of the companies in town to reduce their emissions.

But the battle is not over. And it’s a fight that Kelley is in for the long-haul. He is dedicated to improving the lives of those in his community — through art, as well as activism.

You can hear more about Hilton Kelley’s rise to activism and listen to his reading of his powerful poem, “My Toxic Reality” in this most recent episode of American Diagnosis: The Fight for Environmental Justice.