Home | Articles | The Show Must Go On: Why I Joined Just Human 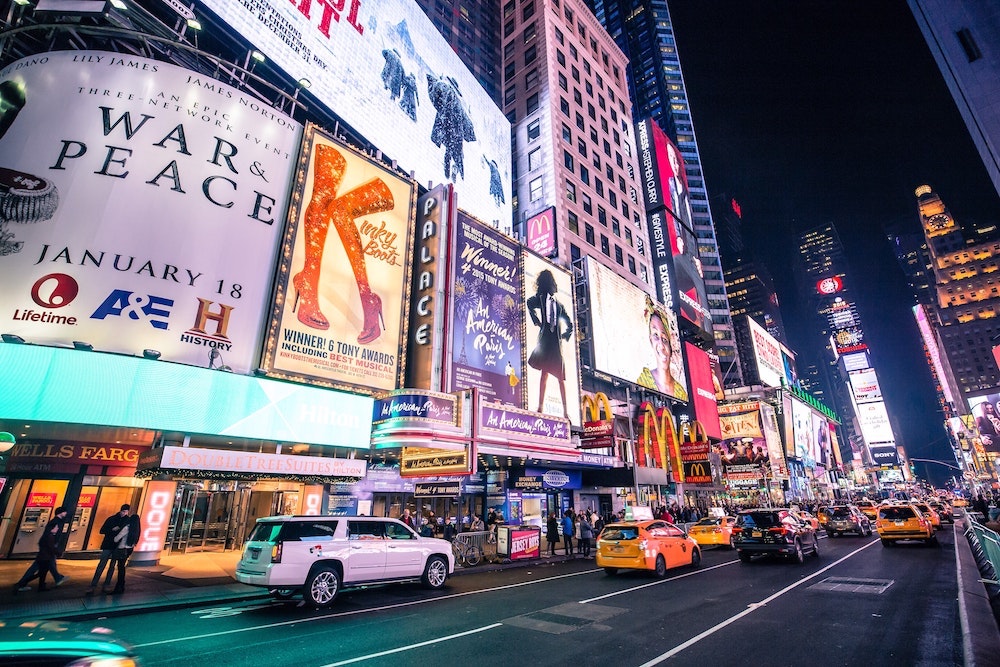 On Tuesday, March 10, 2020, it was business as usual in the streets of Times Square. That night, I pushed past throngs of tourists to watch the musical Company. In the middle of Act One, I heard a character sing “Another Hundred People”, an ode to the crowds that rush through Manhattan every day:

Another hundred people just got off of the train /

And came up through the ground /

While another hundred people just got off of the bus /

And are looking around /

At another hundred people who got off of the plane /

And are looking at us /

Who got off of the train /

And the plane, and the bus /

In 48 hours, those multitudes became a memory. On Thursday, March 12, New York Governor Andrew Cuomo cancelled all Broadway shows, in an effort to slow the spread of COVID-19. Non-profit theatres, opera companies, and dance troupes shut their doors soon thereafter. In the most optimistic view, experts currently predict that live entertainment will not resume regular programming until mid-2021, at the earliest.

As a fan, I was disappointed. As a professional, I was devastated. For 12 years, I produced concerts for one of the nation’s leading orchestras. Now, my career — and my daily motivation — was at a standstill.

There was, as always, a bright side. My industry adapted by streaming archived performances and recording new ones. And once my own company started releasing free digital projects during the pandemic, I felt like I was finally helping to raise the city’s morale.

But as the weeks wore on, I once again started feeling helpless. Covid-19 was exacerbating New York City’s longtime inequality. While I had the privilege of logging virtual office hours, essential workers had little choice but to clock in at grocery stores, public transportation hubs, and other front-line services. Infection rates spiked within their communities, particularly among low-income people of color who could not afford the threat of emergency room bills. These issues played out against ongoing institutional violence against black and brown bodies, as exemplified by the deaths of George Floyd, Breonna Taylor, and Tony McDade (among too many others) in 2020 alone.

I was restless to create meaningful change. And that’s when I came across the work of Dr. Céline Gounder. Throughout her career, Dr. Gounder has advocated for health equity. As a physician, she has treated patients who have displayed the most need — from the wards of Bellevue Hospital in New York City to Native reservations in the Southwestern United States. Beyond one-to-one patient care, she has dedicated herself to spreading accurate and accessible information about public health. To lead that charge, she founded Just Human Productions, a non-profit media organization at the intersection of science and social justice.

As part of Just Human’s growing operations, Dr. Gounder hosts two podcasts: American Diagnosis and Epidemic. Each series explores how public health impacts — and is impacted by — politics, economics, culture, race, gender, sexuality, labor, and the environment. Dr. Gounder has surrounded herself with leading players across these fields (including Ron Klain, Dr. Anthony Fauci, Stacey Abrams, Alicia Garza, and Cecile Richards). And with her recent appointment to President-elect Biden’s Covid-19 advisory board, Dr. Gounder can now formulate policies she has long promoted.

When an opportunity arose on the Just Human team, I knew I had found what I was looking for. And I’m proud to announce that, earlier this month, I signed on as Dr. Gounder’s COO.

During the first phase of my career, I helped musicians share their messages. At Just Human, I still promote storytelling. And the biggest difference isn’t that I’ve switched from live performances to recorded podcasts. Nor has there been a major shift in my personal mission. (As a concert producer, I always worked to uplift underrepresented populations, as both artists and audiences members.) But now, I’m in a position to ensure equity on a larger scale than ever before.

I will always value the importance of the arts. Even though my career has taken a new path, I haven’t strayed too far afield. After all: until Covid-19 is under control, until a vaccine is widely distributed, and until we determine how performers and patrons can safely convene in theatres, this industry-wide intermission will continue.

At Just Human, I’m collaborating with a team that empowers individuals to make informed decisions about their own health, as well as the health of their communities. And through that work, I look forward to the day when my former colleagues can say “let’s go on with the show”.