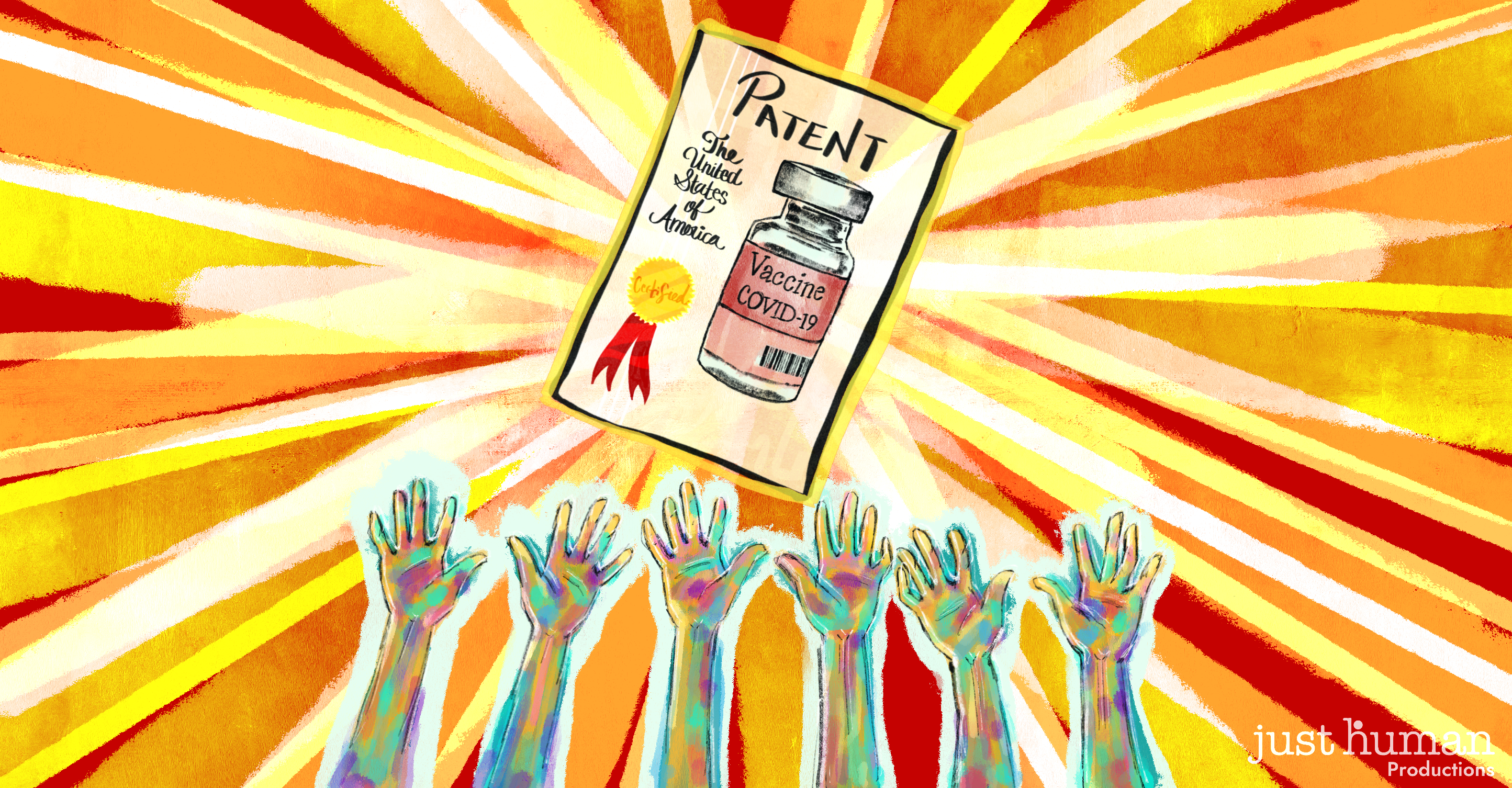 Patents have helped propel innovation and economic growth since the United States was founded: The authority to grant patents is one of only a handful of enumerated powers of Congress set forth by the framers of the Constitution. But those same framers were concerned enough with balancing the public good that they set some boundaries: Patents would “promote the Progress of Science and useful Arts, by securing for limited Times to Authors and Inventors the exclusive Right to their respective Writings and Discoveries.”

Now, as COVID continues to rage globally — with India and Brazil reporting over 200,000 new cases daily — many countries remain unable to buy or produce the vaccines they desperately need. And the same dilemma that faced the framers of the Constitution flares with new urgency: How to incentivize invention — but also limit its rewards so that the public can benefit, too?

“The problem in this pandemic is the knowledge being hoarded by only a few countries and not being shared,” says Rohit Malpani, a public-health consultant and advocate who sits on the board of a U.N. agency called Unitaid.

In Episode 75 of EPIDEMIC, Dr. Céline Gounder discusses the controversy around patent protections for COVID vaccines, how the U.S. government might compel companies to share vaccine technologies, and how the American patent system might be reconceived for the public good.

The role of patents

Patents confer a legal right to twenty years of exclusive use of an invention or technology, creating temporary “monopolies on knowledge,” says Christopher Morten, deputy director of NYU Law’s Technology Law and Policy Clinic. Yet along with spurring innovation, they can constrain a given invention’s spread — and in the case of COVID vaccines, they’ve worked as a barrier to ramping up global production.

At the center of the controversy is Patent No. 10,000,916,070 — ’070 for short. The technology covered by this patent stabilizes the all-important “spike protein” that coronaviruses use to latch onto cells. In isolation, this protein becomes floppy — but the technology covered by ’070 keeps the protein in the right position to trigger the best-possible immune response. The technology predates the pandemic: Researchers at the National Institutes of Health, Dartmouth College, and the Scripps Research Institute developed it as a way of combating other coronaviruses, such as Severe Acute Respiratory Syndrome (SARS) and Middle East Respiratory Syndrome (MERS), with the help of millions of dollars of taxpayer money.

When the pandemic hit, pharmaceutical companies seized on the technology —  incorporating it into “every single dose of the Moderna vaccine, the Pfizer-BioNTech vaccine, the J&J vaccine, and others as well,” says Morten, who recently co-authored a report on the patent.

Patent ’070 has become one crucial obstacle to producing an adequate global supply of vaccines. Wealthier nations in Europe and North America have bought up so much of the vaccine supply that it’s been hard for other countries to purchase more — even when they can pay for it — and raw-material shortages and production bottlenecks have limited production, too. While President Joe Biden has promised to donate 80 million doses — what he’s called “the arsenal of vaccines for the rest of the world” — but that’s only enough to vaccinate 1% of the world’s population. Some say that a conversation focused only on donating excess vaccine supply misses the point.

“A lot of people want to have the conversation about supply without talking about intellectual property,” says Priti Krishtel, co-founder of I-MAK, an organization dedicated to making access to medicines more equitable. But to Krishtel and many others, vaccine equity depends on questions of intellectual property — and the pandemic has brought these dilemmas to the fore: “Is knowledge meant to be developed in collaboration or in competition?” she asks. “Is knowledge meant to be held onto with a time-limited monopoly? Or in a global catastrophe like this, is knowledge meant to be shared freely to help save humanity?”

For critics of the patent system as it operates today, patents have become a tool to drive revenue — not innovation. To Krishtel, the current system — with the Patent and Trade Office (PTO) dependent on revenue it gets from patents — has led to “over-patenting” in recent decades, with patents “given out for anything and everything.” “We’re not incentivizing what we actually want to see,” she says, “which is… people getting these drugs once they come to market without monopolies restricting the number of suppliers — blocking competition and keeping prices high for far too long.”

So how might the patent system be made more flexible amid catastrophe — or even reimagined altogether? In the short term, a patent waiver could reduce barriers to lower-income nations producing their own vaccines. Last October, India, South Africa, and other nations asked that patent protections on the vaccines be temporarily lifted.

In early May, U.S. Trade Representative Katherine Tai announced that the Biden administration supports waiving intellectual-property protections for COVID vaccines, and will join World Trade Organization (WTO) negotiations aimed at doing so — a position that opened up new possibilities for global vaccination efforts. Germany, Japan, and others still oppose the waiver, and the companies that have brought vaccines to market will likely be reluctant to lose control of mRNA platforms that have helped their stock valuations soar. Krishtel calls it both “a hugely important step” and “the beginning of a very long road.”

The push for a waiver of the WTO’s Trade-Related Intellectual Property Rights (TRIPs) agreement has emerged, in part, because an earlier bid at knowledge-sharing foundered. A year ago, the World Health Organization and partners launched a Covid Technology Access Pool (C-TAP), meant to be “a global one-stop shop” for developers of COVID therapeutics and vaccines. Companies could contribute intellectual property and data on their own terms, with the aim of facilitating “timely, equitable, and affordable access” to COVID health products. “A year later,” says Malpani, the public-health consultant, “we still do not have a single company or even a single public institution that has contributed to this pool. And I think that’s a real disappointment — and a real indication as to why the waiver was necessary.”

In the past, high-income countries have balked at waiving intellectual property rights during pandemics. In the midst of the AIDS crisis, in the early 1990s, developing countries could not afford new antiretroviral drugs, developed to treat HIV. “When you look in the early years of the HIV pandemic,” says Malpani, “the pharmaceutical industry said, ‘If we share our intellectual property, or if we allow for global production of these medicines, essentially the sky will cave in and innovation will stop. You’ll get no new antiretrovirals.’” But when compulsory licenses were issued by several countries — allowing governments to waive intellectual-property rights without license owners’ permission — drug costs plunged, access soared, and innovation continued. Dozens of antiretrovirals and combination pills have been developed in the years since.

Yet while patents confer a right to make something, they don’t necessarily include the recipe — so that even when patents are shared, they may not be useful. Morten points out that while the TRIPS waiver would lower patent barriers, “it won’t do anything to compel companies like Moderna to share their secrets. And so you need something more. You need… some kind of government intervention on top of the TRIPS waiver to get the secret knowledge out of the big vaccine makers.”

Opponents of sharing patent technology and trade secrets cite concerns that once technology is shared, it can’t be taken back. But Morten finds this objection dubious. The major vaccine manufacturers already have contracts with companies around the world to produce their vaccines, he points out — so safe and voluntary sharing of trade secrets is possible. He suggests that legal agreements could extend intellectual-property rights and trade secrets to help countries in need of vaccines, while still safeguarding these companies’ investments.

And in the case of Moderna, which developed its vaccine in partnership with the National Institutes of Health, Morten sees another window of opportunity as well: While some vaccine producers, including Pfizer-BioNTech, have said in public documents that they are paying royalties for the use of Patent ’070, Moderna does not have a license to use the patent. Morten says the government — which is the senior partner in the patent co-owned by Dartmouth and Scripps — could demand over a billion dollars in compensation, and might leverage this to compel Moderna to share its technology.

He points to precedent in the case of Gilead Sciences — and a 2019 federal lawsuit alleging that Gilead had infringed on U.S.-owned patents when it sold Truvada, an HIV-prevention drug. Morten says that with the lawsuit, the government was, in part, aiming “to discipline Gilead’s pricing … and negotiate a better deal for the American public.” He suggests that a similar approach might persuade Moderna “to share some of its secret manufacturing steps… with the U.S. government” as non-monetary compensation for the use of the patent.

While waivers and lawsuits might bring flexibility to patents and trade secrets, they leave the current system essentially intact. Some critics argue that the time is ripe for an overhaul of the patent system — an opportunity to rethink incentives that have led to current roadblocks. Malpani points to the possibility of separating the cost of development from the price of the product — funding research not through “monopolies and the promise of high prices,” but through “push funding” from philanthropies and public institutions that could steer research towards particular societal problems. Another option is “pull funding” — such as large cash prizes that could come in place of patents. In exchange for prizes, developers would surrender or license out intellectual-property rights.

Malpani doesn’t expect companies to jump at such ideas, given that they could reduce profits. But such a rehaul “place[s] a larger premium on the public good instead of just private profit,” he says. “We need… governments to set out clear rules, to make investments where there is a market failure. And to ensure that… new products… can ultimately be brought to the market in a way that’s equitable, that’s affordable, and that’s appropriate for different populations.”

In the meantime, India and Brazil remain in crisis, with thousands dying from COVID every day. “When India and South Africa asked for the waiver in October, we should have said yes immediately,” says Krishtel. “But we are where we are. And today, if we put our weight behind unlocking global manufacturing capacity, we will come out of this sooner… There is no way out of this pandemic without achieving vaccine equity.”