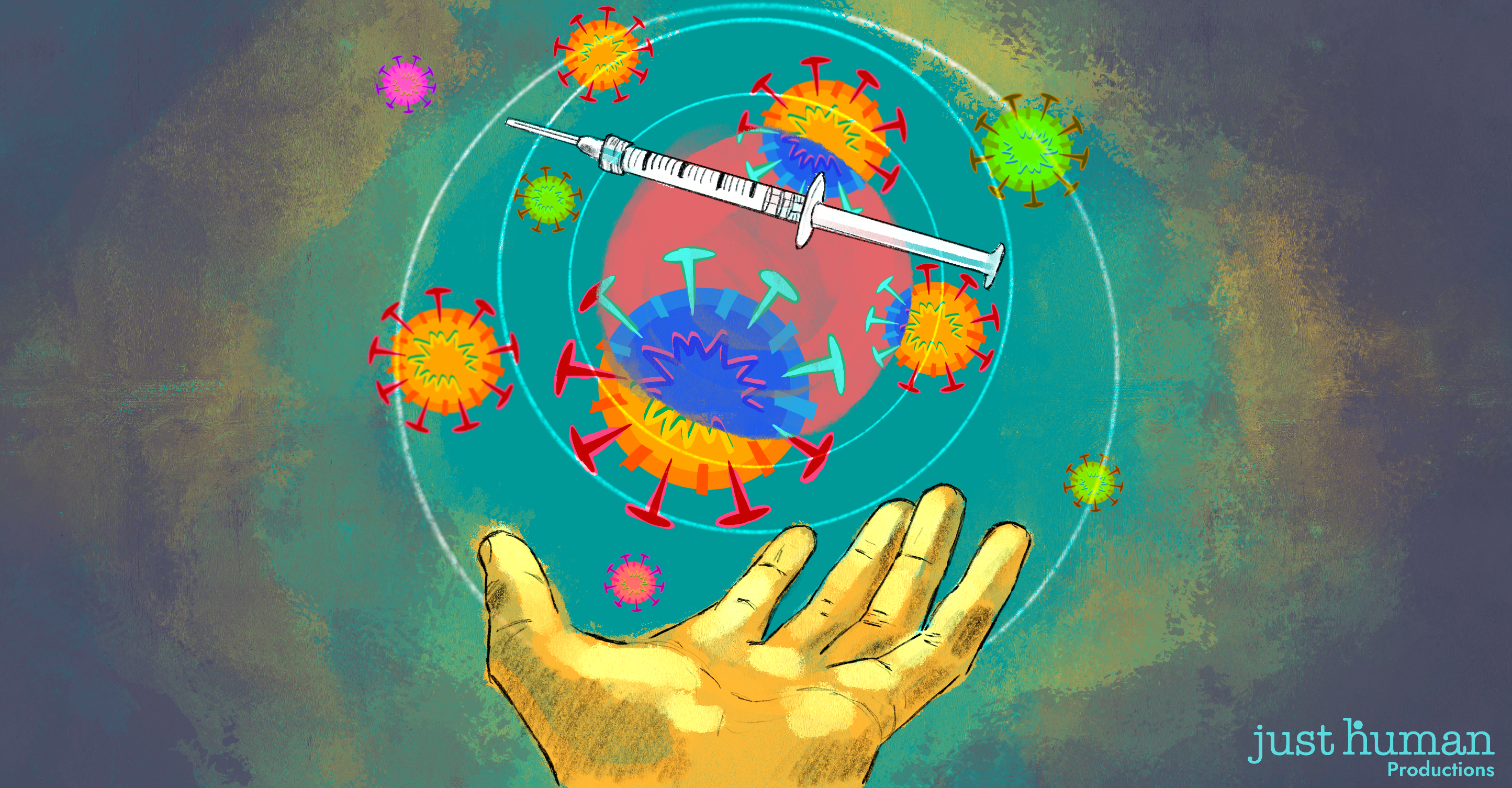 “What we’re seeing is that the virus is evolving in similar ways, in many different parts of the world. And I think that to us, that wasn’t surprising because I think what we were starting to understand and realize is that this is essentially what’s called convergent evolution.” — Richard Lessells

All across the globe, we are beginning to see new strains of the SARS-CoV-2 virus emerge. With each new infection, the coronavirus multiplies itself and has an opportunity to mutate. And just as the process of evolution favors adaptations that increase strength and survival in the natural world, viruses also are changing in ways that help their kind survive. We’ve seen this in the form of variants like B.1.1.7, or “the UK variant,” which has changed to become even more infectious than the original strains of the SARS-CoV-2 virus. Now, we’ve also seen a new variant emerge in South Africa. But in this case, the virus has mutated to evade our natural immune defenses. In this most recent episode of EPIDEMIC, Dr. Celine Gounder speaks with different scientists who have been studying 501Y.V2 — the technical name for the South Africa variant. They explain what makes this strain so uniquely troublesome, and what steps we need to take in order have the best chance at achieving viral control.

Salim Abdool Kalim has been collecting samples of coronavirus in South Africa since the pandemic first began. He and his colleagues had been surveying for new variants. For a while, nothing looked different — but suddenly, just as cases were beginning to decrease across the region, they noticed a jump in cases in Nelson Mandela Bay. Richard Lessells, who works with Salim at the KwaZulu-Natal Research and Innovation Sequencing Platform (KRISP), also noticed that something seemed different from the first wave: in this new cluster of cases, hospitals were seeing more severe disease in younger people with supposedly strong immune systems.

They had found one of the new and very troubling coronavirus variants. It had mutations on its spike protein that allowed it to more effectively invade human cells. They named the variant 501Y.V2. “We estimate its transmission is about 50% faster,” Karim explains. “For example, in the Western Cape, it took 107 days to reach a hundred thousand cases in the first wave. In the second wave it took a mere 54 days, 50% faster.”

Unfortunately, increased transmissibility was not all this new variant had to offer. It appeared that it was evading the body’s immune response, as well. This was especially bad news, explains Jinal Bhiman, a medical scientist at the National Institute for Communicable Diseases in South Africa, as the region had already been hit hard during the first wave of coronavirus. “Our healthcare systems have been overwhelmed. We’ve had so many deaths — many, many, many deaths.” But the emergence of new variants in an area that has already been devastated by coronavirus, Richard Lessells explains, is no act of random misfortune. It was the same for the B.1.1.7 variant in the UK — and, as we are now learning, the U.S. as well. Lessells explains that this process is called convergent evolution — the same mutations are popping up in different parts of the world because these mutations make the coronavirus fitter.

And this was exactly what Jinal Bhiman found to be true. Not only did the 501Y.V2 variant find a way to become transmissible, but it also found a way to evade the body’s immune response. This meant that even if someone had already caught the coronavirus and fought it off before — they could be re-infected with 501Y.V2. It also meant that vaccines, like AstraZeneca’s, were suddenly much less effective. Even though your body’s immune system may have been trained to recognize the spike protein from the vaccine, it doesn’t recognize the spike protein of the 501Y.V2 variant because it looks so different.

Despite these factors, it’s still recommended that vaccinations continue. Having some immunity is better than none at all, and we need to do all we can to protect ourselves during these challenging times. “We’ve got to use our full protection toolbox,” Salim explains. “We’ve got to use the vaccines. We add the prevention tools of masks and social distancing, and hand hygiene, et cetera. Those, in combination, will give us our best shot at trying to reduce viral transmission and try and achieve as close as possible to viral control.” This is especially important when you consider that the 501Y.V2 variant was first reported in the United States in January — and the UK variant, B.1.1.7, has been found in the U.S. as well — in addition to our own home-grown variants, which we are still just learning about. The science remains clear: wear a tight-fitting mask that can effectively filter out viral aerosols, practice social distancing, remain within your household bubble — and get vaccinated when it’s your turn with the first vaccine available.

To hear the full conversation — which includes much more detail on how the South Africa variant emerged, how it behaves in the body, and what scientific strategies are being used to combat it — follow this link to listen to EPIDEMIC, E62: The Rise of the South Africa Variant.