Home | Articles | Caregiving as Infrastructure: A Bridge for Families, and a Road to a Healthier Economy 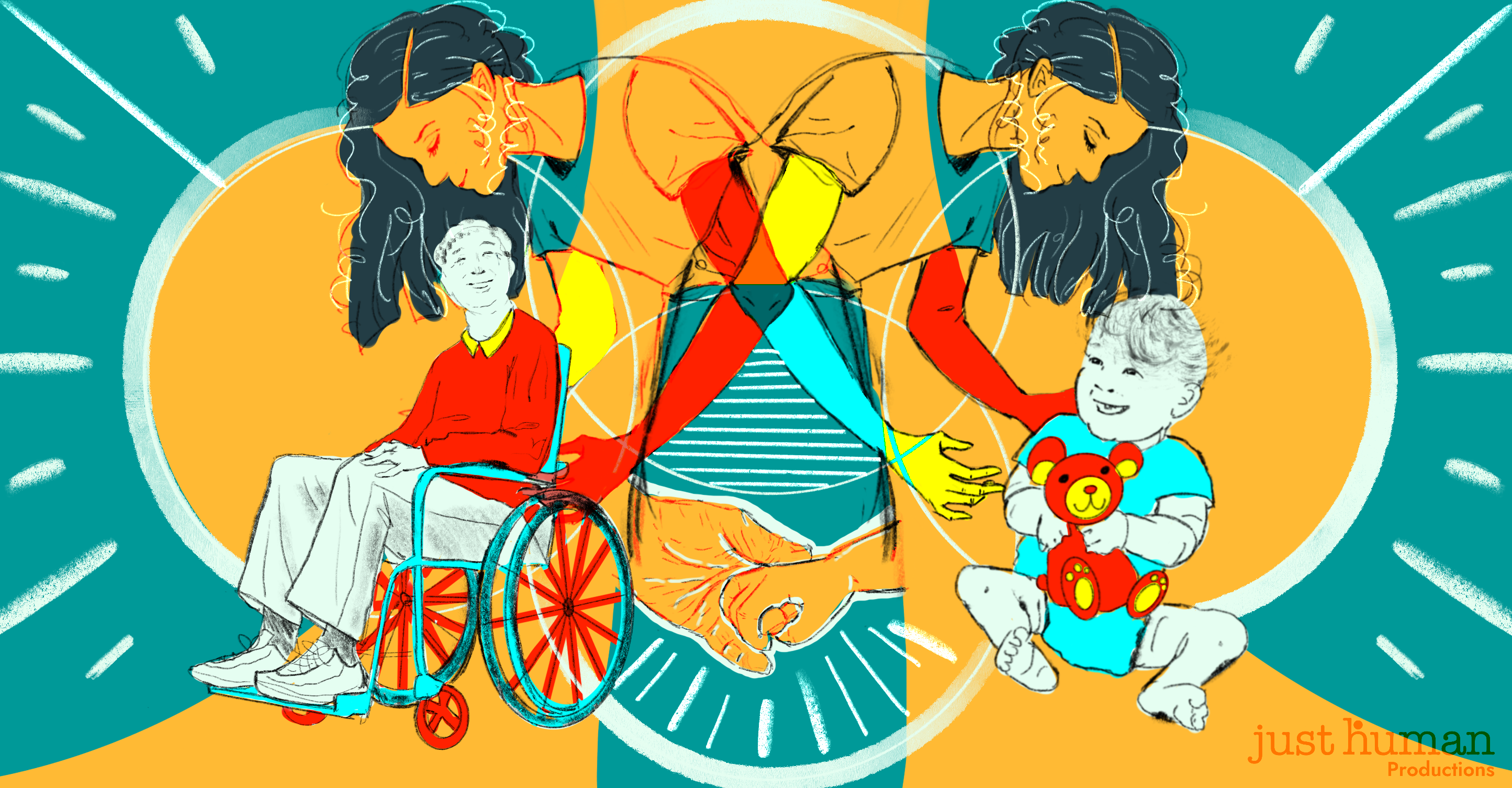 For parents around the world, the pandemic upended an often-delicate balance between childcare and work. With schools and childcare facilities closed, parents suddenly took on full-time childcare and school duties even while continuing other full-time jobs. Of the more than 2 million women who left the American workforce during the pandemic, many left due to the strains of this predicament.

It’s a dilemma long familiar to many single parents struggling to balance work and family, anxiously accustomed to the way a child’s illness or a family emergency can imperil jobs, rent, and entire livelihoods. “When you’re paycheck to paycheck — as soon as your paycheck is cut off, there’s no savings,” says Sarah Murphy, an activist for women and children in Pennsylvania, and a single mother herself.

Murphy’s own pandemic predicament found her without a job, without childcare — as the elderly neighbor who had cared for her son was vulnerable to COVID — and scrambling for money to pay for home internet service so her son could continue with schoolwork when his elementary school closed. She was scrambling, too, to support her son in the midst of shared uncertainty. “We would just get in the car, roll the windows up… and just wave at people,” she recalls. “Like, ‘Hey, how you doing?!’ You know, you have to find ways to survive.”

The United States is the world’s wealthiest nation — yet it lacks comprehensive structural support for parents. In Episode 78 of EPIDEMIC, Dr. Céline Gounder explores caregiving as infrastructure in the United States — and our opportunity to transform childcare systems in the wake of the pandemic — with Sarah Murphy, Stephanie Coontz, Julie Morita, and Erika Moritsugu.

Prior to the 19th century, men and women were both seen as caregivers in family life, says Stephanie Coontz, Director of Research and Public Education at the Council on Contemporary Families. Women were considered equal providers, and children typically spent about half their time with people who weren’t their biological parents — often older relatives and community members.

This dynamic changed during industrialization: As men’s wages rose, they often became the primary earners, leaving women at home to take care of the house. Around the same time, childcare work grew more racially segregated. Before industrialization, servants were typically neighborhood girls hoping to save up money before marriage. But as factory jobs opened to white women, providing a more lucrative alternative to housework and childcare, servant demographics shifted: “People begin searching for permanent servants — lifelong servants,” says Stephanie Coontz, Director of Research and Public Education at the Council on Contemporary Families. Increasingly, servants were Black, Indigenous, or immigrants; and childcare became seen as an unskilled job — even as people ostensibly valued the work. “Women and men — who idealize the role of motherhood and how important childcare is — actually have contempt for it when it is a paid job,” says Coontz.

During World War II, as women were pushed into the workforce, the government funded national childcare systems: The Lanham Act of 1940, for instance, funded the care of about 600,000 children — and the children who participated ultimately showed gains in educational attainment and employment as adults. But the funding dried up after the war, when women were expected to leave their wartime jobs and return to their households.

Still, many women remained in the workforce and juggled work duties and household roles. In 1971, Congress passed the Comprehensive Child Development Act, which would have created a national system of daycares as the Lanham Act had done three decades earlier — childcare centers that would have been open to all Americans, on a sliding scale. On the eve of a trip to China, President Richard Nixon vetoed the bipartisan bill — and linked it to American fears of communism — on the grounds that it would “commit the vast moral authority of the National Government to the side of communal approaches to child rearing.” This casting of childcare as politically perilous has lingered — and had dire repercussions for generations since.

Murphy, the women’s and children’s advocate in Pennsylvania, has felt the lack of a childcare safety net firsthand — both as a child and as a mother. She recalls her mother’s impossible conflict in 1976 when, desperate to keep her job and care for her three-year-old daughter, she found herself on the brink of giving birth, with no paid time off. Murphy’s mother gave birth at home alone, cut the umbilical cord herself, abandoned the newborn, and went to her shift at the hospital the very same day. (The baby survived, and she and Murphy are now forging a relationship.) “She simply could not get the day off work,” says Murphy. “My sister ended up put behind a dumpster because services for mothers were unavailable forty-five years ago. That hasn’t changed. Women are still not having adequate childcare, not having adequate resources.”

Murphy thinks of her mother now, when faced with her own wrenching dilemmas as she struggles to balance childcare and work. “There’s been times where I didn’t have childcare and I had to sneak in my kid in supply rooms at work,” she says. “I felt like I was making that same choice that she did, every time I had to do that with my son.”

The Biden administration announced in April the American Families Plan, a $1.8 trillion plan that would have made childcare and education more affordable, and expand tax credits for workers and families. The plan aimed to address the centrality of caregiving not just in individual lives, but in the economy as a whole — making childcare free for lower-income families, and cutting middle-class families’ childcare expenditures from about 14 percent of their annual income to 7 percent or less. The hope was to reconceptualize infrastructure as “not just limited to the roads and bridges within our nation, but… also about the workforce,” says Julie Morita, past Health Commissioner in Chicago and current Executive Vice President of the Robert Wood Johnson Foundation.

A compromise reached this week with a bipartisan group of senators limits those aims — sticking to a more  traditional notion of “infrastructure,” with investment in roads, electric utilities, and broadband internet, and leaving much of the investment in childcare and fighting climate change for a future bill.

Yet advocates for children and families insist that the redefining of childcare as infrastructure is essential — and that now is a pivotal moment to acknowledge this, given the pandemic’s outsized impact on mothers and its particular trials for children. In the midst of sudden isolation for many families, children have been deeply affected by the crumbling of their routines and social worlds.

Murphy, for one, was at a loss in explaining the pandemic to her son, and still worries about the emotional fallout of having pulled him away from his friends. “My son started pacing the floors because we couldn’t go outside,” she recalls. “So he was in here — just pacing.” When local schools reopened, she jumped at the opportunity to send him.

“There’s indirect impacts that children have experienced because of COVID, and those things relate to problems with social isolation,” says Morita. She believes that the resources included in the Biden Administration’s $1.9 trillion American Rescue Plan last January — including support for reopening schools — “are the kinds of things that can actually help children recover from some of these traumatic events.”

Along with expanded child tax credits and extended paid-leave credits, the program aimed to stabilize and support childcare providers, who were struck hard during the pandemic: Nearly 1 in 4 childcare centers closed permanently, and 40 percent of childcare providers went into debt to maintain operations.

But similar to the Lanham Act during World War II, this influx of aid is temporary. To Erika Moritsugu, White House Asian American and Pacific Islander Senior Liaison, no gains are secure without a permanent national standard for paid sick days. “It’s working people, particularly women, who were suffering without these policies before the pandemic — and now they’re even more important,” she says. “We can’t keep people safe and healthy and rebuild our economy without allowing people the time off from work that they need for their own health.”

Only 1 in 5 working people currently have access to paid family leave, and only 40 percent have access to paid medical leave, says Moritsugu. And this lack of paid time off, sick leave, and other policies to support families have long driven women out of the workforce. Communities of color — particularly women — have been hit especially hard by the lack of such measures. Many are frontline workers, in low-paying jobs with few benefits, and have had an increased risk of COVID exposure on the job.

Murphy emphasizes that other parts of life must also become more affordable to improve the economic plight of women and the security of families. She wants to see affordable housing, meaningful mental-health support, and more affordable utilities — and she hopes to see more parents involved in developing social programs, too. “We are powerful and we have a wealth of knowledge and experience,” she says, “and can be helpful at getting that change done.”