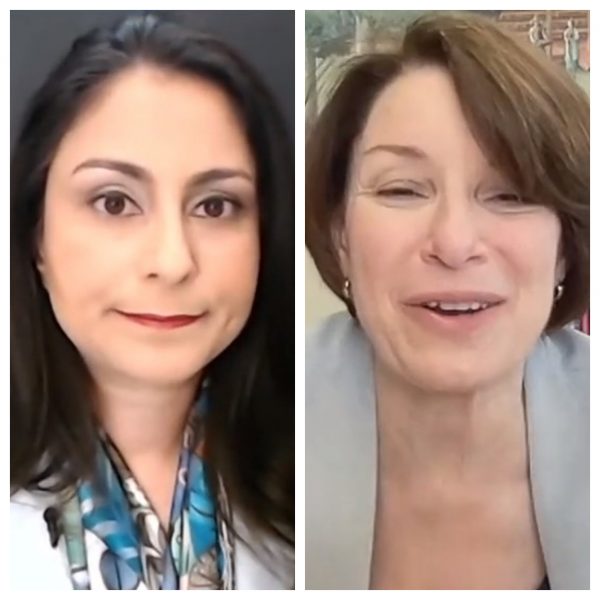 On Wednesday, April 14, 2021, the U.S. Congress Joint Economic Committee invited Dr. Celine Gounder to provide testimony on the subject of “Vaccinations and the Economic Recovery.”

As an internist, infectious disease specialist, and epidemiologist who’s worked throughout the U.S. and the world, Dr. Gounder has been an invaluable resource during the pandemic, even earning a role on the Biden-Harris Transition Covid-19 Advisory Board. As Founder and CEO of Just Human Productions–a non-profit specializing in public health media–she and her team have also disseminated vital Covid-19 information through the “Epidemic” podcast, written articles, and illustrated guides.

After the witnesses offered individual opening remarks, they answered questions from the members of the Joint Economic Committee. During the hearing, Senator Amy Klobuchar (D-MN) asked Dr. Gounder to address the problem of rampant misinformation about Covid vaccines:

Dr. Gounder: “There are really two main groups of people who have hesitancy about getting vaccinated. You have people who we would call the ‘moveable middle’, who are really just straight up concerned about safety and effectiveness. And there has certainly been misinformation about that. And then you have people who really just don’t trust [the] government, don’t trust public health officials, don’t trust the health system, and that’s a much more difficult one to overcome. What we have seen with respect to disinformation is that there [is] a combination of incorrect information that is circulating online. This has been looked at and studied and there are actually — and I have this in the written testimony — some 12 people who are responsible for the vast majority of that. And they have remained on the social media platforms. They have not been de-platformed. And that would be a highly effective way of dramatically reducing the amount of disinformation. Because essentially what’s happening is those are the sources that then get amplified.”

Senator Klobuchar: “Well it’s rare that someone is so practical in their answer… Thank you. Maybe we can try to do something about these 12 people.”

(Watch the video clip of the exchange here.)

“The 12 people” Dr. Gounder mentioned are known as the “Disinformation Dozen.” The Center for Countering Digital Hate, a non-profit focused on online hate and misinformation, released a report on these entities last month, noting that they “are responsible for almost two-thirds of anti-vaccine content circulating on social media platforms.”

Dr. Gounder’s testimony has already inspired significant strides toward battling Covid disinformation. On Monday, April 19, 2021, Vox’s Recode reported that Senator Klobuchar and Senator Ben Ray Luján (D-NM) had sent a letter to Facebook CEO Mark Zuckerberg and Twitter CEO Jack Dorsey. In the letter, the senators directly addressed points that Dr. Gounder raised during the congressional hearing. “For too long,” wrote the senators, “social media platforms have failed to adequately protect Americans by not taking sufficient action to prevent the spread of vaccine disinformation online. Despite your policies intended to prevent vaccine disinformation, many of these accounts continue to post content that reach millions of users, repeatedly violating your policies with impunity.” Per Recode, “the senators urged the companies to take action against 12 anti-vaccine influencers”–the Disinformation Dozen–“who spread anti-vaccine content on the internet.”

Watch the full video of the remote hearing here.