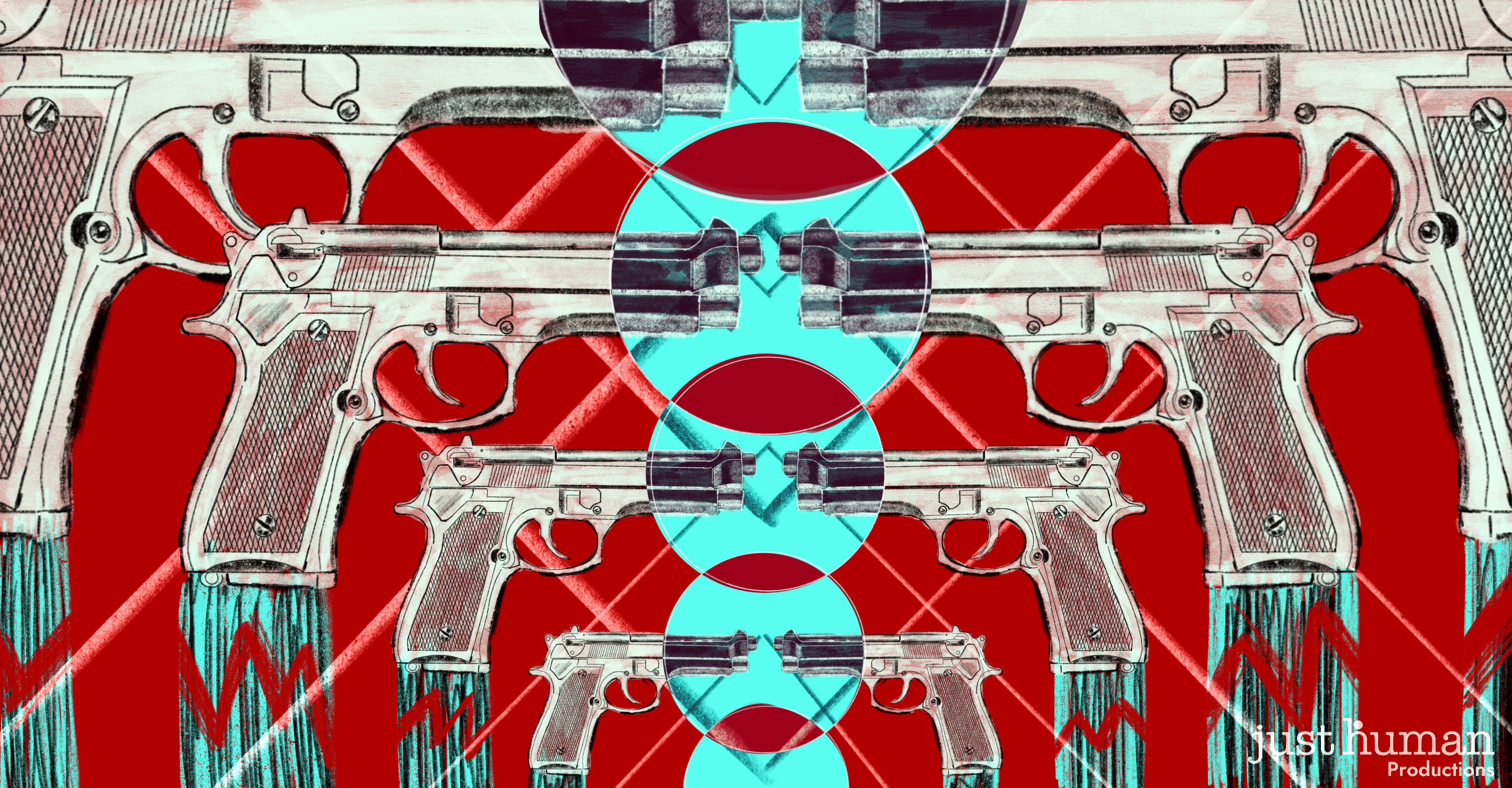 In late May, The New York Times reported on trends in gun sales, noting a steady rise in gun ownership over the past decade, with a jump in early 2013, just after the mass shooting at Sandy Hook Elementary School. As of March 2020, 39 percent of American households owned guns—a 32 percent increase since 2016. While gun ownership was rising long before the pandemic, COVID sharpened the trend, with people hunkered down at home, often anxious, and looking for ways to feel safe.

In Season 3 of American Diagnosis, Dr. Céline Gounder investigates this notion of gun ownership as self defense—the rationale behind most firearm purchases, both during the pandemic and preceding it.

In Episode 13, Gounder explores this notion with health-policy professor David Hemenway, criminologist Gary Kleck, public-policy professor Philip Cook, and economist Sara Solnick—and finds that ideas of “self-defense” vary widely, as does the thoroughness of self-report in surveys on gun use. One consistent finding, however, is that widespread possession of firearms may not make America safer—even for those holding the guns.

“The problem is that bringing a gun into your house or carrying a gun really increases your risk of lots of problems,” says David Hemenway, professor of health policy, Director of the Harvard Injury Control Research Center, and author of “Private Guns, Public Health.” He cites the risk of “suicide, homicide, and unintentional firearm injury, as well as getting your gun stolen and then being used by other people… So this says that carrying of firearms doesn’t improve public safety. It probably makes it worse.”

Some people dispute that claim, of course: John Lott, president of the Crime Prevention Research Center and author of the controversial book “More Guns, Less Crime,” points to patterns in violent crime between 1977 and 1992. Specifically, in Episode 12, he compares violent-crime rates in eight states that adopted “right to carry” laws—meaning that one doesn’t need to demonstrate “good cause” to legally carry a concealed firearm—to rates in eight states where such laws were not adopted. Lott argues that as more people were allowed to carry concealed weapons, would-be criminals—fearful of coming up against another armed person—increasingly shifted to crimes such as burglary (in which the likelihood of confronting another armed person is generally low) .

Meanwhile, John Donohue, a Stanford law professor and research associate at the National Bureau of Economic Research, believes—along with most gun-violence experts—that more gun ownership leads to more crime. Donohue points to a 40 percent drop in the number of deaths from gun massacres during the 10 years of the Federal Assault Weapons Ban. Once the ban ended, he notes, there was a large increase in deaths involving an assault weapon or a high-capacity magazine.

As for Lott’s analysis, says Donohue, the years he studied happened to include a crack-cocaine epidemic in the United States—and crack cocaine and violent crime went hand in hand. Lott explains the lower violent-crime rates in the largely rural states Lott looked at by noting those states were largely spared the effects of crack cocaine. “It was really a crack phenomenon that was explaining” higher crime rates in states without right-to-carry laws, says Donohue, “rather than the adoption of a right-to-carry law restraining a crime increase.”

Disagreements on the data—even on the same data—are common when it comes to the question of firearms and self-defense. “One of the reasons why there’s so much debate about this kind of research is the lack of good data,” says Gounder. “Seemingly basic information—like how many concealed-carry permit holders are in a given state, or if a concealed-carry holder was involved in a crime—aren’t available.” Access to such data is often restricted, as is federal funding for research on gun violence.

Faced with a dearth of data amid an increase in gun violence, how might we assess root causes of the surge?

In Episode 14, Gounder discusses the instrumentality of guns with criminologists Franklin Zimring and Ronald Clarke, and suicidologist Michael Anestis. In the late 1950s, when England and Wales began heating ovens with gas made from oil instead of coal—rendering the fumes substantially less toxic—suicide rates dropped dramatically. And this wasn’t simply a decrease in suicide by domestic gas: Suicide rates dropped across the board. By this logic—essentially, that making an object less lethal can help save lives—making guns themselves less lethal, or simply less available, might save lives, too.

Reducing guns’ lethality—as through the seizure of automatic and semiautomatic firearms—may reduce body counts. But some describe this approach as merely a bandage on a wound, and insist that more wide-ranging reforms are necessary.

Australia offers one test case for such a theory. In Episode 15, Australian economist and firearms researcher Andrew Leigh, public-health professors Philip Alpers and Simon Chapman, and gun-safety advocates Rebecca Peters and Roland Browne consider Australia’s sweeping gun reforms following the 1996 Port Arthur Massacre, in which 35 people were killed. In Australia — where the goal of “self-protection” is not considered justification for gun ownership — all six states agreed to ban semi-automatic rifles and shotguns.Thorough background checks and 28-day waiting periods are mandatory. Gun reforms have removed more than 650,000 guns from circulation—and garnered approval ratings of 90 to 95 percent. Australia saw 13 mass shootings in the 18 years leading up to the Port Arthur Massacre. Since the reforms, there have been only two—in 2018 and 2019—while the United States saw around 250 mass shootings in 2021 alone. And while the Australian reforms were designed to reduce mass shootings, suicide and homicide rates have also decreased in the years since.

While Australia was successful at reducing gun violence, criminals around the world continue to access guns. In Episode 17, public-health professors Cassandra Crifasi and Daniel Webster, University of Chicago Crime Lab cofounder Harold Pollack, and Iowa sheriff Lonny Pulkrabek discuss a critical question: How do criminals get their guns?

The vast majority of guns used in crimes in the United states were purchased legally, either from licensed dealers or at gun shows. But guns don’t always stay with their legal owners. People with criminal records who are looking to buy guns can avoid background checks by purchasing firearms on websites or through private sales. And while the federal minimum age requirement for buying a handgun is 21, younger people often purchase guns from private sellers.

Legal gun purchases have surged since the beginning of the pandemic, and gun violence killed nearly 20,000 Americans in 2020—the highest number in two decades—while 24,000 more died by suicide.

In Episode 1, Gounder spoke with Dr. Mark Rosenberg, the former President and Chief Executive of the Task Force for Global Health, about his friendship with former Rep. Jay Dickey, a lifelong NRA member. While Rosenberg says they began as “arch enemies,” over time, they learned to bridge their differences and find a way forward that balances gun safety and gun rights. Through their friendship, they “genuinely changed each other’s minds,” says Rosenberg, and demonstrated the importance of integrating perspectives on gun legislation and safety.

Finding an effective approach—or approaches—to reducing gun violence may not be so straightforward. But, as Australia has modeled, reducing gun violence is possible. While the Australian approach may not be right for the United States, other approaches may be more feasible. These approaches—many of which are discussed in Season 3—include reaching out to high risk groups and providing them with behavioral, social, and financial supports to stabilize them; “soft policing,” or strengthening communities to police themselves through non-oppressive means; leveraging our understanding of the psychology of mass shooters, many of whom are suicidal themselves; and encouraging gun retailers and other trusted pro-gun individuals to deliver messages about firearm safety. Whatever the method, soaring rates of gun violence in the United States make finding a solution to this epidemic more urgent than ever before.