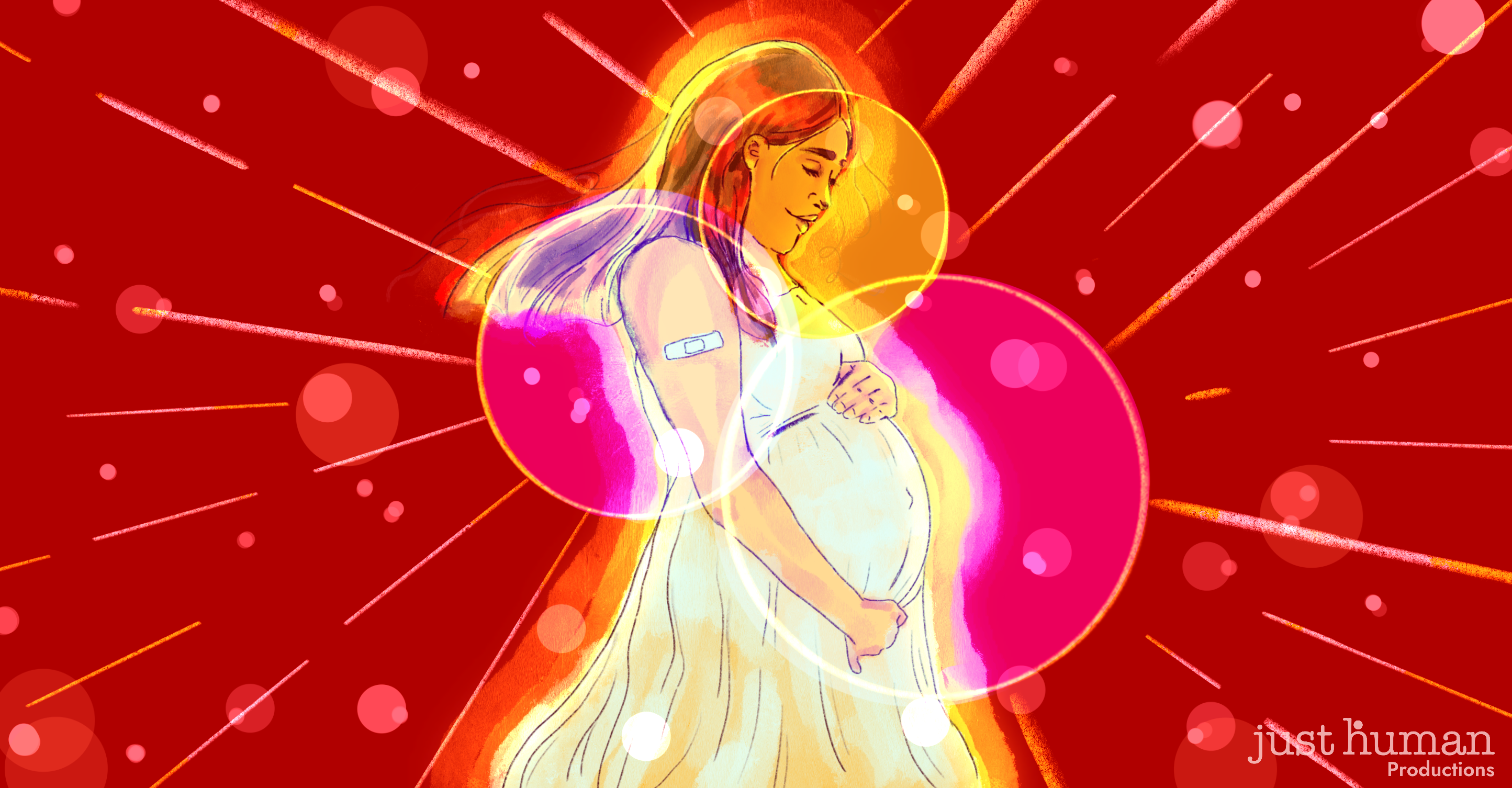 This blog post highlighting Episodes 65 and 79 of the Epidemic podcast is sponsored by RubiconMD.

Since the beginning of the pandemic, vaccines have been seen as critical to halting COVID’s spread. While effective and safe vaccines are now available in many parts of the world, safety concerns linger — often due to the propagation of vaccine disinformation.

Recently, young women and mothers have voiced concerns about how vaccines could affect fertility, nursing, and menstruation. While no evidence suggests that COVID vaccines affect fertility or a growing fetus, pregnant and nursing women have historically been excluded from clinical trials, including those for COVID vaccines — meaning there was less data available, especially in early days of the vaccine rollout. Yet vaccines are crucial for pregnant women: Those who contract COVID are more likely to be admitted to intensive-care units or placed on ventilators, and run far higher risks of preterm birth.

“Pregnant and lactating women have been sort of a taboo group to study … for forever,” says Dr. Andrea Edlow, a maternal-fetal medicine physician at Boston’s Massachusetts General Hospital, on Episode 79 of EPIDEMIC. The result is often a void of safety data specific to pregnant women and nursing mothers — leaving fertile ground for worry and myths to take hold.

What role has disinformation played in concern around vaccines and pregnancy?

On Episode 65 of EPIDEMIC, a young mother, Heather Simpson, shares her story of transformed attitudes toward vaccines. Having received all her regularly scheduled immunizations as a child, Simpson grew concerned about vaccinations while she was pregnant — and became a vocal member of the anti-vaccination movement — before ultimately becoming an advocate for vaccines. Simpson recalls watching a nine-hour film during her pregnancy — portrayals of young children suffering the supposedly terrible consequences of vaccination. Although the film’s assertions were false, they persuaded Simpson not to vaccinate her child. Simpson’s story illustrates the power and peril of vaccine disinformation for new and expecting parents.

While some current concerns have been fueled by this more general opposition to vaccines, others are specific to the COVID era. A former Pfizer scientist and vice president, Michael Yeadon, is one source of virulent myths surrounding COVID vaccines. While Yeadon’s early pandemic tweets spoke of the urgency of vaccines, his tweets grew more ambivalent as the pandemic wore on. “By April [2020], he started becoming more skeptical about vaccines,” says Steve Stecklow, a Pulitzer Prize-winning journalist with Reuters who has followed Stecklow’s evolution. The tweets surprised former colleagues and even Yeadon’s own family, says Stecklow. “He started making these predictions that there would be no second wave. And in the UK, there was a huge second wave.”

Yeadon then went further, filing a petition to halt all COVID vaccine trials, citing his concern that antibodies created by the vaccine could target Syncytin-1, a cell-fusion protein critical in placenta formation. Yeadon became one of several people “who perpetuated this myth that Syncytin-1 looks a lot like the coronavirus spike protein — which, of course, the vaccines are designed to target,” says Alice Lu-Culligan, an MD-PhD student at the Yale School of Medicine. “So these people argued that after vaccination, the body would inadvertently attack Syncytin-1 in the placenta.”

While the petition did not stop the trials, the concerns went viral: One month after Yeadon filed his petition, a survey by the non-profit Kaiser Family Foundation found that 1 in 8 unvaccinated Americans had heard that “COVID-19 vaccines have been shown to cause infertility.”

Lu-Culligan says the lack of specific trial data on pregnant women and the COVID vaccine made it easier for such rumors to take hold. “When a lot of these pseudo-scientific theories started proliferating,” says Lu-Culligan, “we were already starting at a serious disadvantage by not having thorough safety data established and already conducted, or at least initiated.” Lu-Culligan has seen these worries percolate among her peers — and recalls a friend looking for vaccination guidance “because she was nursing her infant at the time and she was on these ‘mommy forums,’ and saw a lot of really scary posts about how the vaccine would harm her child — and in some cases, potentially kill her child.”

Why have women been excluded from clinical trials?

The lack of data referenced by Lu-Culligan — and the void it leaves for disinformation to fill — is the result of the exclusion of pregnant and nursing women from COVID trials, which has substantial historical precedent. Throughout the 1900s, women were routinely excluded from clinical trials. “There were very rigid, very paternalistic guidelines that were in place, expressly excluding women of childbearing potential from participating in trials,” says Lu-Culligan.

Only in 1993 did the National Institutes of Health Revitalization Act establish guidelines for including women and minorities in clinical trials. Even today, women’s health receives unequal research attention. “We have a long, long way to go,” says Lu-Culligan.

Thus far, the effects of the COVID vaccine on menstruation have not been studied extensively, although data suggest that any impacts are small. Some women have reported changes to their cycle after receiving COVID vaccines, but one-time shifts in the menstrual cycle are typically not cause for concern — and are often simply due to the body’s negotiation of priorities.

“Activating an immune response is a stressor to the body,” says Lu-Culligan. “And while the body is ramping up a robust immune response toward the vaccine in order to protect us from future COVID infection, it is possible that this stressor puts … the menstrual cycle on hold.” This, she says, is a natural bodily response.

To ease worries accompanying unexpected changes in menstruation, physicians can explain this shuffling of physiological tasks. “I think we need to reassure the patient that it’s really long-term changes … to the cycle that we’re most worried about,” says Lu-Culligan. “A one-off period is not necessarily something to be overly concerned about.”

How does being pregnant affect a person’s experience having COVID?

While infertility is not a risk from the coronavirus or COVID vaccines, pregnancy makes having COVID more dangerous. In part, this is because a woman’s immune system is naturally suppressed during pregnancy.

In addition, as Edlow of Massachusetts General Hospital explains, pregnancy involves the enlarged uterus “push[ing]up the diaphragm, which is what you need to drop down to take really nice, deep breaths…. And if the diaphragm can’t physically drop as well, because the uterus is higher …, pregnant women are more predisposed to get severe lung illness.” Hence the greater likelihood of pregnant COVID patients needing ventilators to breathe.

What do we know about how vaccines affect pregnant and lactating mothers?

Noting the lack of data on COVID vaccines and pregnancy, Edlow and her team launched a study to determine how vaccines affect pregnant and lactating women. People were eager to participate. “I think the people just felt immense relief” at the possibility of vaccination, says Edlow. “And we just all felt really fortunate that we could start to have that anxiety lift, that we could do something proactive.”

The results? “Antibody responses from vaccination were uniformly higher than the antibody responses that were attained from having natural COVID-19 infection during pregnancy,” says Edlow. “So when we looked across the pregnant, the lactating, and the non-pregnant groups who were vaccinated, all of their antibody titers were much higher than the titers that we saw in the blood of pregnant women who had COVID-19 in pregnancy.” And pregnant women experienced only the typical side effects of the vaccine.

While the primary goal of vaccinating pregnant women is the protection of the mother, vaccinations during pregnancy may confer some immunity on the fetus, too. This transfer of COVID antibodies happens because mother and fetus share blood during pregnancy; it can also happen via breastfeeding after birth.

Dr. Leena Mithal, a physician-scientist at Northwestern University and Lurie Children’s Hospital in Chicago, has studied this process in detail. Her team found that “as long as the vaccine was given [to the pregnant woman] greater than two weeks prior to delivery … there were protective antibody levels in the mom, as well as in the baby’s circulation.” When vaccination happened earlier in the third trimester, antibody levels in the baby turned out to be higher, too.

Moreover, although many mothers have declined vaccines — or stopped breastfeeding — due to concerns about mRNA making its way into breast milk from the Pfizer and Moderna vaccines, research conducted by Dr. Stephanie Gaw’s team at the University of California San Francisco, found no trace of mRNA in the breast milk of vaccinated women.

Should pregnant and lactating mothers get vaccinated?

Considering the available evidence, Gaw — who studies maternal health and infectious diseases — recommends that all pregnant and lactating mothers get vaccinated. Additionally, she believes that the COVID pandemic, as well as the 2016 Zika epidemic, demonstrate how crucial it is to include more pregnant and lactating women in clinical trials in order to understand how pregnancy affects immune response. “We should definitely be including pregnant women in more research studies to understand how infections are dealt with during pregnancy,” she says. “And hopefully come up with new medications or vaccines or other strategies to prevent infection in the fetus.”

More abundant data on the effects of vaccines and therapeutics for pregnant women and lactating mothers holds additional promise, too: The more research we have, the less likely it may be that targeted disinformation will succeed in creating harmful — even deadly — misconceptions.

“This article shares an insightful COVID-19 study amongst pregnant women that found by vaccinating pregnant women, it not only protected the mother but also transferred immunity to the fetus through blood during pregnancy and breastfeeding. Pregnant women are often overlooked in clinical research, but impactful findings like this highlight the importance of including this group.”— Gil Addo, CEO/Co-founder of RubiconMD

About RubiconMD
RubiconMD is leading the mission to democratize medical expertise through its virtual-first specialty care solutions. The RubiconMD eConsult and Behavioral Health platforms remove barriers to specialty expertise by rapidly connecting primary care clinicians to a board-certified panel of experts. These solutions empower clinicians to deliver higher-quality care plans in a timely manner. RubiconMD eliminates unnecessary referrals and services, reduces patient wait times and travel burdens, and allows primary care to practice at the top of their license. With RubiconMD clinical teams can streamline their workflows, lower the cost of care, and deliver a better patient experience. For more information, please visit www.rubiconmd.com, or follow us RubiconMD on LinkedIn, Facebook, or Twitter.