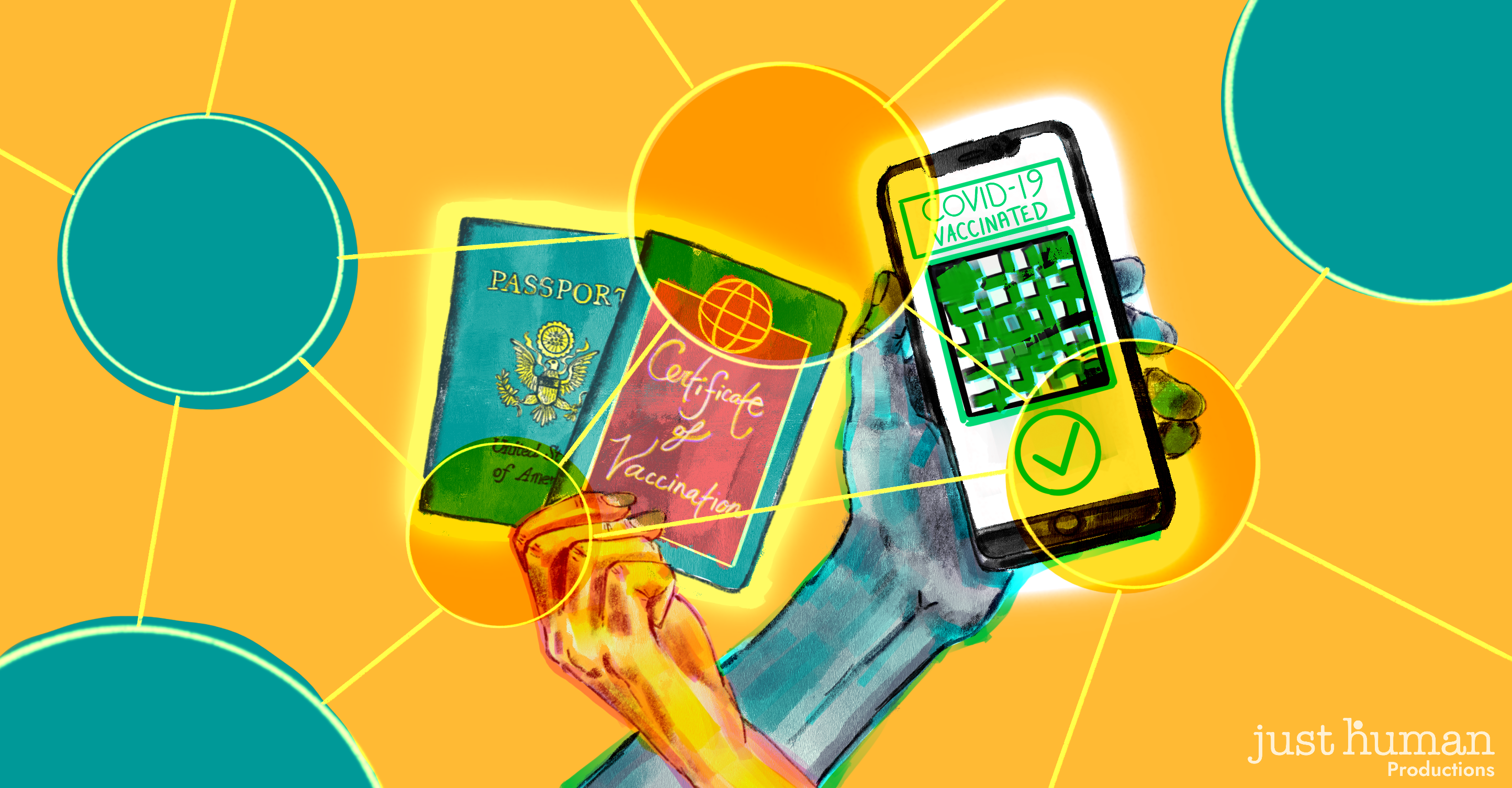 About 65 percent of American adults have received at least their first dose of vaccine against COVID — but that leaves 1 in 3 adults unvaccinated. As the press towards “normal life” continues this summer, vaccine-certificate systems — offering digital proof of immunity — have emerged as one form of COVID gatekeeping. Yet such systems raise concerns about privacy, equity, and global disparities in access to vaccines.

This month, the European Union launched its Digital Covid Certificate — which indicates COVID vaccinations, negative test results within the past 72 hours, and recent COVID recoveries conferring immunity — allowing travelers to move freely through Denmark, Germany, Greece, Croatia and Poland. The program will be extended to all 27 EU countries as of July 1.

In Israel, an interim system called Green Pass used similar eligibility requirements to regulate access to athletic and cultural events, restaurants, and other shared spaces, with the aim of reducing transmission and encouraging vaccination. Now, after three months of Green Pass, and with over 80 percent of Israel’s adults vaccinated, Israel has retired the system.

Many have called for similar certification programs in the United States — but civil-rights and privacy concerns loom large. In Episode 77 of EPIDEMIC, Dr. Céline Gounder explores the ethics and efficacy of vaccine certificates with Albert Fox Cahn, Lawrence Gostin, J.P. Pollak, and Fatima Hassan.

“The ticket to daily life”

Vaccine certification can help minimize the risk of breakthrough infections for those who are vaccinated, and help unvaccinated people know what environments are safe for them. To Lawrence Gostin, Director of the World Health Organization’s Center on National and Global Health Law, “vaccine passports are probably the best way to get us back to some semblance of normalcy as soon as possible.”

But even a system that, on the surface, seems aimed at safety and clarity can become a tool of exclusion: Albert Fox Cahn, Executive Director of the Surveillance Technology Oversight Project, worries that vaccination-tracking systems may exclude millions who don’t have equal access to vaccines. If a vaccine passport “becomes the ticket to daily life,” says Cahn, “you’re potentially excluding millions of people because they don’t have this thing that once was optional, but now becomes indispensable.” Cahn compares the passports to voter-identification laws — and how the ostensibly “simple” requirement of a government ID or driver’s license has kept millions of Americans from being able to vote.

Private businesses, of course, can choose their rules around vaccination, just as they can freely make policies around wearing masks — or shirts, or shoes. What they can’t do is discriminate based on sex or race. Some are considering vaccination requirements for their employees to come to work in person. Many universities will also require students and staff to provide proof of vaccination in order to come to campus this fall.

Still, ease of access to vaccination varies, and vaccine requirements can create an ethical quandary. “The only way that proof of vaccination systems can be ethically justified,” says Gostin, “is if everybody who wants a vaccine can get a vaccine.” Gostin believes that if businesses and institutions require their workers to be vaccinated, they must provide resources to support the process — such as paid time off and childcare for vaccination appointments. “Equity can’t be a side issue,” says Gostin. “It has to come front and center.”

Excelsior Pass: “Upwards” with access — and onward with risk?

The Biden administration has said it will not implement a federal vaccine registry or certification system — leaving states to make their own decisions on vaccine credentialing. Florida recently passed a law banning private businesses from requiring proof of vaccination — setting the state on a collision course with the cruise-line industry, which many believe depends on vaccine credentialing to restart safely and successfully.

Meanwhile, New York state has rolled out its own vaccine-certification system: Excelsior Pass.

On the Excelsior Pass website, names are cross-checked with the state’s vaccine-registration database: Users can store their passes, which include names, birthdates, and QR codes. The system — which is completely voluntary — has been used at Yankee Stadium, Barclays Center, Madison Square Garden, and elsewhere.

Excelsior Pass, developed in collaboration with IBM, bills itself as a “free, fast, and secure way to present digital proof” of vaccination or negative COVID tests: “Think of it as a mobile airline boarding pass,” the website urges. But it’s hardly foolproof: Cahn found the process ripe for fraud, and was able to download the QR code of someone he’d never met in just 11 minutes. While venues can ask for identification to verify the authenticity of a QR code, not all will do so. And Cahn points out that Excelsior Pass lacks a full privacy policy or terms of service to set standards for its use.

In addition to concerns over authenticity, Cahn sees privacy concerns with Excelsior Pass and similar systems. Although IBM does not track users’ locations through Excelsior Pass, the venues using Excelsior Pass can reveal where a person’s pass was used.

“Every time you pass that… ‘vaccine bouncer’ at the entrance to the supermarket, or tap into the subway station, it will now have that location record,” he says, pointing out that Immigration and Customs Enforcement has used similar location data to detain and deport undocumented immigrants. While New York Governor Andrew Cuomo signed a bill into law barring law enforcement from accessing contact-tracing information from public-health sources, the law doesn’t apply to a vaccine app like Excelsior Pass.

“And so we are creating this vast reservoir of data where the state is essentially asking us to just take them at their word that nothing bad will happen,” says Cahn. “The thing that is most important in battling vaccine hesitancy is building trust in as many communities as possible — but when you’re creating this new layer of uncertain tracking, it does just the opposite.”

In May, New York lawmakers presented a bill that would require the state to protect the privacy of information collected by Excelsior Pass, and prevent law enforcement from accessing that information.

J.P. Pollak, Assistant Professor of Clinical Epidemiology at New York’s Weill Cornell Medical College and Co-Founder of the not-for-profit Common Project Foundation, sees an opportunity to restructure the way we access medical records, “It’s very difficult today to get access to all of your health records in one place, unless you happen to receive all of your care from within the same health system,” he says. Pollak and his team have created Common Pass as a way to share one’s test results or vaccine records without sharing identifying information — simply a ‘yes/no’ signal that indicates to a venue, ‘I’ve met your entry requirements, and it’s okay for me to proceed.’” The system also allows users to maintain privacy about how they’ve met those immunity requirements — whether through vaccination, recent illness, or a negative COVID test.

Travel, vaccine equity, and the scramble for immunity

The summer tourist season — and an entire year’s pent-up desire for travel — may encourage the regional rollout of these and other initiatives, and of shared standards around vaccine records, says Pollak. Yet travel itself uncorks another slew of inequities, as vaccination requirements in some regions — such as the United Kingdom and the E.U. — function as de facto travel bans for others.

Fatima Hassan, Founder of the Health Justice Initiative in South Africa, describes the dilemma for nations where vaccines are not yet widely accessible: “So British and German and Australian and Canadian tourists will be able to come to South Africa because they’ve received their vaccine,” she explains. “And all of us are just going to be sitting, waiting at home… for vaccine appointments.” Many countries, like South Africa, have struggled to access enough vaccines to cover their populations, as wealthier nations hold on to more doses than they need.

In the scramble for immunity, some countries are using a hodgepodge of vaccines — not all of which may be considered equal as travel regulations coalesce. With the most widely recognized vaccines — Pfizer and Astra-Zeneca, for instance — largely confined to wealthier nations, even some vaccinated people may ultimately have their movements limited due to having the “wrong” vaccine. And beyond the prohibitions’ impact on longed-for recreational travel, such restrictions can curtail educational and work opportunities — sending ripple effects through economies and lives. “On the one hand we want to encourage large-scale vaccination,” says Hassan. “But… this global disparity in access to supplies means that… [a vaccine requirement] is something that the majority of the world’s population will not be able to meet.”

Hassan, who advocated for widespread access to affordable HIV/AIDS medications in the 1990s and 2000s, finds the current predicament infuriatingly familiar. She recalls that people living with HIV were banned from traveling internationally, or from working in the airline industry. “We never thought that this would happen again in our lifetime,” she says. “But here we are, 20 years later, having to fight the same battles, the same arguments, the same drug companies around access for people in the Global South. And so it shows to me that what has happened in the last twenty years is that people don’t actually value life in the Global South.”

Hassan points to work around vaccine equity as necessary not just for public health, but as a bulwark against deepening prejudice. “Instead of imposing travel ban restrictions,” she suggests, “why don’t you open up the… knowledge and share the vaccine know-how?”